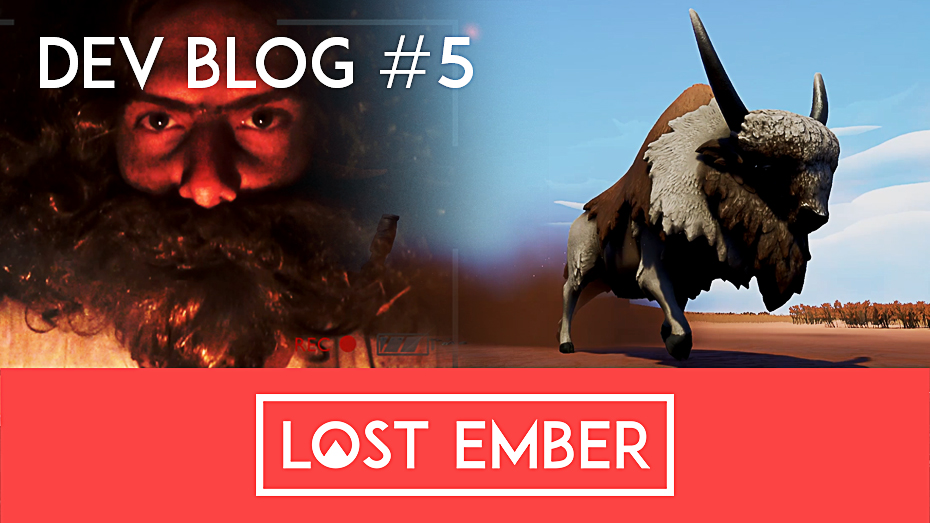 We’re finally back for our therapy session with you and we’re about to share, like, a lot. Oof, you might want to take a seat, we’re lying down on the couch for a moment as well. Do you want the good news or the bad news first? Ok then, let’s go.

Let’s get this out of the way first:

So, we’ve had a couple of obstacles to overcome lately and they ate up quite a lot of our time (and nerves). I’ll start with what is probably most important to you, and most painful for us: We are not going to be able to make the release this year 🙁 Lost Ember is definitely gonna happen, so don’t worry! We are aiming for a release in Spring 2019 now and we hope that you still have a little patience left for us. Now let me explain. Don’t know if you knew, but we’re pretty much a bunch of stubborn perfectionists when it comes to Lost Ember. It’s our precious little baby and we’re unwilling to compromise. We need to make right by our baby and by you guys. So we had to make a decision a while ago to part ways with our writer. We had (possibly too slowly) started to realize that we would be unable to bring together the story that he wanted to tell with the one we had in mind for Lost Ember. We potentially put too much time into trying to make it work because we really wanted to and finally making that decision was hard. We needed a little time to digest this and figure out how to continue before we felt ready to tell you. We are in a really good place by now, so here we are, lying down on the couch, telling you. Together with our new writer Edwin, we now put the story we wanted to tell in place and are very happy with it.

Right now, Edwin is working on putting it into dialogue and we cannot wait to hear it all in game. Anyway, as nice as this is now, a change like that takes quite a bit of time off of everyone’s schedule. We gave our very best to make as few changes as possible to the world we already had, but things like designing new character models and starting some memory elements from scratch could not be avoided, not to mention the time we spend figuring everything out together with Edwin. As I said, we needed some time to digest the whole thing and have by now made a lot of progress, but obviously, a lot of other things had to wait, so we need a little more time and this actually leads to the next time consumer: Needing more time inevitably leads to needing more money as well, as we kinda still need to eat and stuff, so we had to go and hunt for more funding. And what can I tell you, researching all the different options, preparing all the material and information needed, contacting people and actually talking to people also takes time. And we’re still in the middle of it all. We have a couple of options and now we have to decide which one’s the best for Lost Ember and for the team and the next project. Does it sound weird to be thinking about future projects when we haven’t even shipped this one? Maybe, but we would very much like to keep working together after this. So fingers crossed and if you happen to have a rich uncle who simply has no idea what to do with all the moneys, you know where to send him 😉 Anyway, don’t worry, we have several possible scenarios in mind, giving up is not one of them. We are going to get our baby out the door, we just need a little more time. Thanks for the session, we’re feeling a little better now, just a little though.

What else we’ve been working on

Oof, glad we talked about that, now let’s talk about some fun stuff too. A big topic for us recently was interactions. We wanted to give the different animals more personality through little interactions with the world and each other to make everything feel more alive. A bunch of animals already got some cute little things to do like eating berries, shoving each other or breaking items. Also, most of our vegetation is now physical, meaning they rustle and move when you run through them, and the impact of this working is huge. The hummingbird now has little parcours here and there that you can fly through for funsies. Right now we are working on the goat and the environments she inhabits and we had to put her on a diet, as she was a little chubby for the athletics we wanted her to do 😀 We’re also reworking how UI works and have it be less prominent. Thing is, with a dozen playable characters, hints and tutorials can hardly be avoided, but cluttering the screen with hints is also knocking out the experience cold, so we’re working on ways to get just the right balance there by trying out different approaches.

Good News (for some)

We have good news for everyone who backed above the Physical Gold tier and for everyone attending Gamescom. We’re planning to be ready to send out your Alpha keys within the next weeks, so do look forward to playing at least some Lost Ember soon-ish 😉 And for everyone that is planning to go to Gamescom this year: Pascal, Sinikka and Matthias are taking our updated demo to Gamescom. We’re even going to have our own small booth for the first time ever! (it’s not as expensive as we thought it was :D) So if you’re not receiving an Alpha key, come by and play the demo at least and have a go at our Wheel of Fortune to win stuff and things. We’re gonna be in hall 10.1 at booth A019, so go make a big red note in your calendar now 😉

Now we’re going to go full steam ahead trying to finish the Alpha. We just had a massive planning session and the list of things to do looks long and scary, but when you look closer, the items are rather small. Also, Unreal Engine’s version 4.20 is freshly released and it brings some pretty cool features that might actually save us a little time here and there. We still have a tortoise and a sloth waiting to join the zoo this milestone. We’ll hopefully get story dialogue finished in a couple of weeks, or rather Edwin will, then record everything as dummy VO still, because we have to test how well it’s working in game. As soon as we have the dialogue, we’ll make the memories work, they’re only in in a placeholdery manner right now. And then there’s loads more set dressing, animating, implementing of everything to do. It’s gonna be wild and that’s why Tobias and Max are not allowed to come to Gamescom with us, they need to stay put and work, so you might want to give them a hug.

Oh, and one more thing. We have this Discord server and up until now it was supposed to be exclusive to Drip supporters and backers, but actually it’s kind of lonely over there so we’d like to invite everyone in and make it a fun place to hang out. We’re going to make it the go-to place when we’re giving away stuff like wallpapers and any other goodies that might come up. In fact, we’ll be placing the first couple of wallpapers there in a minute. We’d also like to hear all your suggestions on how to make it a cool place to hang out. What’s the kind of stuff that makes a Discord fun? We’re noobs, please help 😀 And obviously, you can ask any questions about Lost Ember, us, the world and the universe there. So come on over, you’re just the kind of people we’d love to hang out with. Because we know that we have some people in the community that don’t feel quite as comfortable with speaking English, we’ll also have a German channel, but don’t worry, no secrets there, we promise to translate anything interesting that might happen over there 😉

Join our Discord here, if you haven’t done so yet: https://discord.gg/jP5VAyN