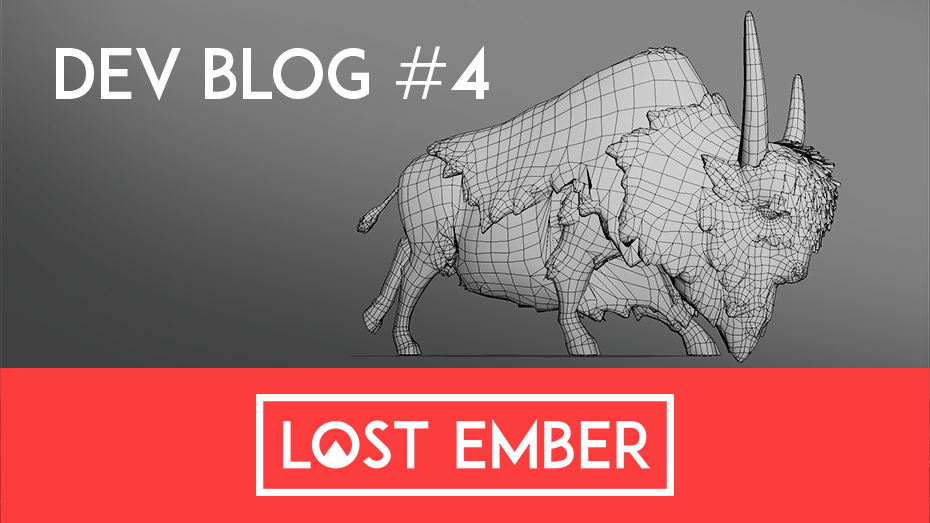 Yes, it’s been a while. It’s been a couple of super busy months. And we’ll try to tell you all about it right now 🙂

Here’s what we’ve been working on:

The last couple of months, our number one priority was getting the first chapter of the game to a state that we would not need to be ashamed to show to important people and maybe media or the likes. So we went ahead and tried to figure out what bits we would need to work on to make that happen. We had the game world in a rough state, so we checked which animals would be needed for this section of the game and here they are: Wolf (surprise!), wombats (yes, they can actually be useful), ducks and ducklings (no, ducklings are not very useful, but they’re cute ;)), moles (or rather armadillos, those guys dig), Hummingbirds (they’re so tiny and nervous) and fish (because wolf is a clumsy swimmer, to be honest). Once again, we also put quite a bit of work into making the story work, putting placeholder VOs into the game, to see if it works as we imagined it to. And then rewrite and record again as needed. To give the story a fitting vehicle, we also tried dozens of different ways to visualize and trigger the memories (those red things that you might remember from the teaser). Here’s a screenshot of the current version of the visuals that we’re kind of happy with at the moment (doesn’t mean it’s not gonna change still ^^). 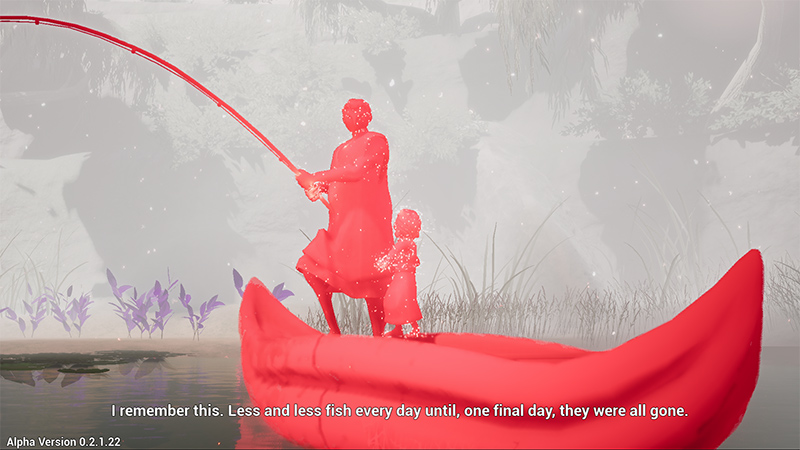 As we playtested the slice of the game with some friends, we realized, that we’ll need to rework camera and controls (not yet again, just the rework we told you about in a Monster of the Week a while ago). We’re roughly happy with what we have now, but let’s see what more playtesting and more new animals bring to the table 😀 Fingers crossed.

Oh, oh, and look at this! Max designed our new key art for posters and such. We like it a lot. Let us know what you think. 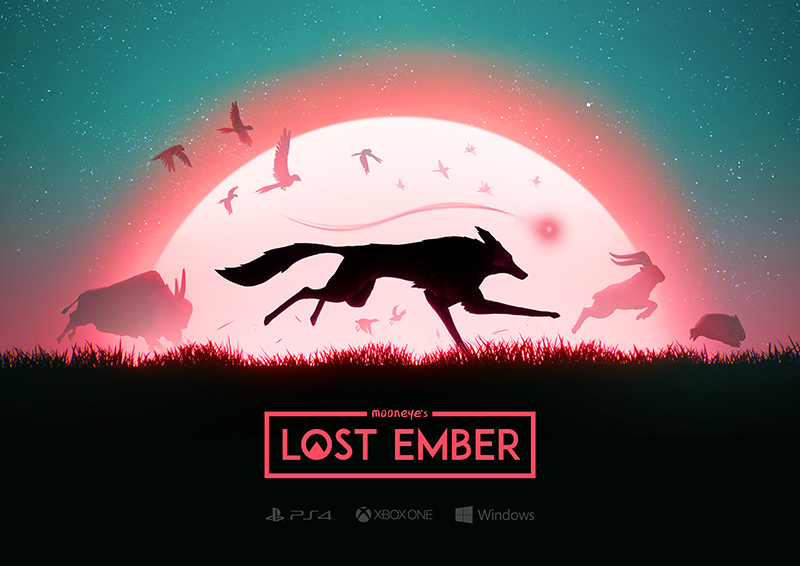 And here’s quite the elegant transition to the next topic:

Conventions! We’ve been taking our new posters as well as a 15 minute piece from the first chapter to PAX East in Boston and then also to EGX Rezzed London the week after. It was awesome! And exhausting as well ^^. People seemed to love the game and we also met a couple of KS backers who were super happy with what we’ve been able to show them. Both conventions were a massive motivation boost for us. It was so important to get in touch with people and see their reactions to the game. When things are difficult sometimes, you start to focus on what is not fun yet and start to forget all the good parts that are in there already. So thanks to everyone who played, we now remember that we’ve been doing an ok job so far. Unfortunately, we couldn’t afford to have everyone go, as we kinda need to work on the game as well. But we brought home some photos and videos, that we thought you might also be interested in. 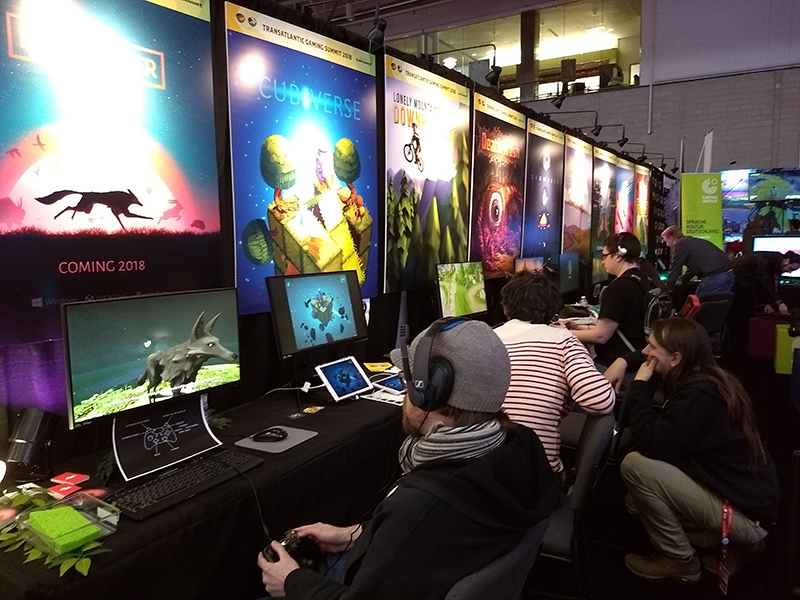 What we’re up to next:

We’ll be taking on the next slice of the game. Implementing a bunch of new animals, as we now have at least all the basic animations and for some animals even more. Filling all the areas with more life and prettiness. Life is a major goal for us right now, more interaction between animals and between animals and environment, just silly little things like being able to eat a berry or give your fellow wombat a nudge. It’s tiny little things that we think will be so good for the feel of the game. Unfortunately though, they’re not tiny to implement. Of course not, nothing ever is 😀 And Lost Ember is going to have so much more sound at the end of the next milestone: More voice over, more sound effects, brand new music. It’s gonna be a party for the ears! Basically the next milestone is “more of everything”, I guess. And then we’ll also have to dive deeper into the not-entirely-non-scary topic of console ports. We’ll also do the first timid steps towards a new trailer, but that’s going to be an ongoing process for months if we want it to be awesome. And we DO. 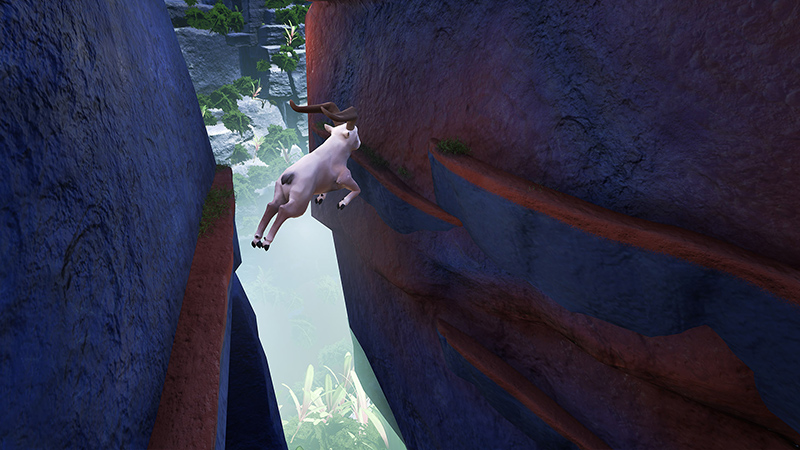 Thanks again for being the lovely community that you are!