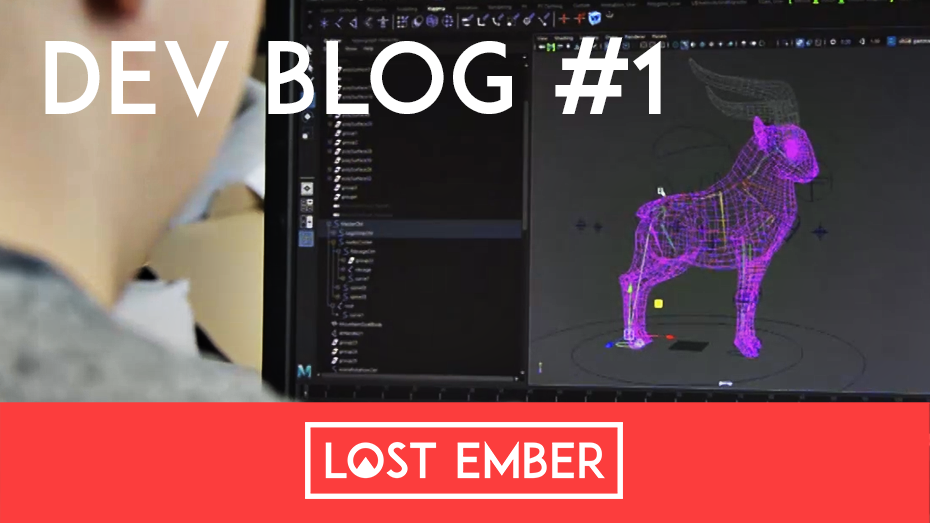 Hey guys! 🙂 As many of you have noticed: it’s been a while since we did an update here on our blog. We didn’t even write an article about the successful Kickstarter campaign! I know, I know, shame on us! And we are sorry and will try to do better from now on. But, we’ve been really busy with development and finally found the time to show you what we’ve been working on!

As we promised during the Kickstarter, we’ll keep on recording our progress and show you some of the features we’re working on on our Youtube channel. Go watch the current video below:

To sum it all up:

First thing we did after the campaign was to finalize the plans for the world, the animals, the story, and everything else and come up with a visualization that helps us keeping the big picture always in mind. We finally have a first draft of every major event that will happen in the game, every area the player passes through, and all the important memories that tell the story of your companion. 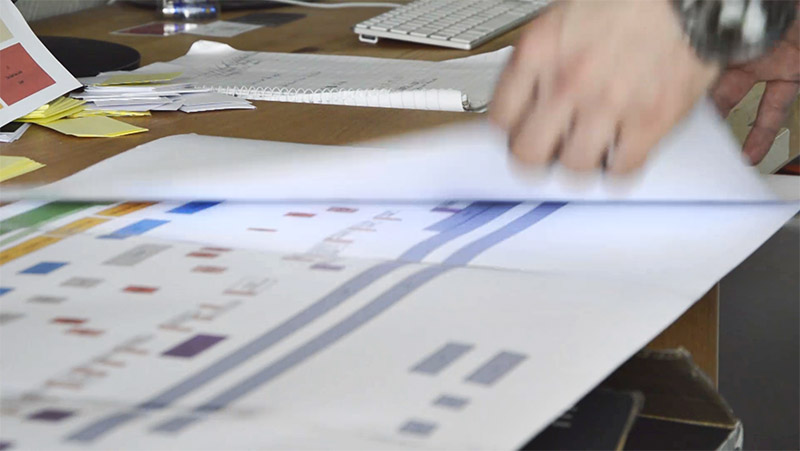 With that we started blocking out the world. What that means is basically we build the whole world in a really, really rough state. Like, mountains are just big blocks and trees and plants look like a 3-year-old drew them (or even worse: Pascal). The point of this is that we can test the pacing of the game. Does this passage we planned really take 10+ minutes to complete? Can that memory really be 5 minutes long or do we need something to make it more interesting? Stuff like that. 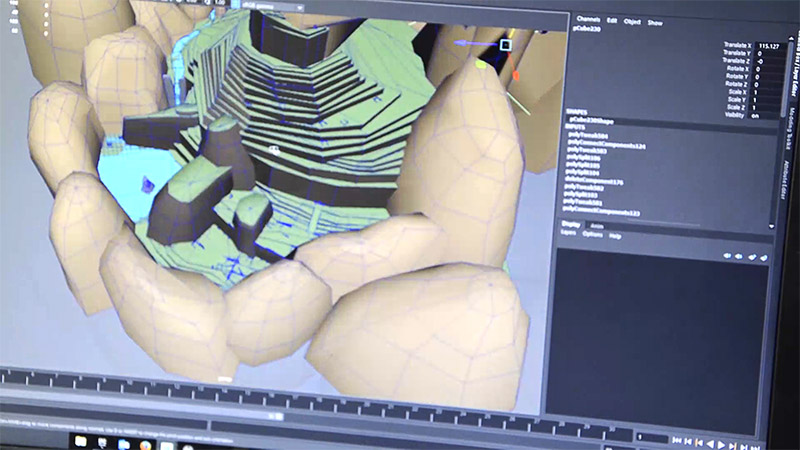 But of course that’s not all. We started working on a few new animals, like our mountain goat that will be able to climp cliffs and huge mountains at ease! To make animation easier, we wrote a couple of scripts that help us with rigging. For those of you not familiar with 3d animation: 3d characters are animated with a skeleton or “rig”. Basically, we build a skeleton not unlike a real skeleton underneath the skin of the character and then bind the character model to this skeleton. So that when you move the arm bone, the characters arm moves with it. Our script not only builds default arms and legs of different animals, but also sets up some controls that help the animator work with the skeleton. So when you move the paw of a wolf, the whole leg and shoulder move along and make for a more natural movement.
We already thought about maybe doing a tutorial on that one as we’re sure that it might help other developers out there, so if you’d like that, just write a comment down below or on youtube and we try to find some time to do it 🙂 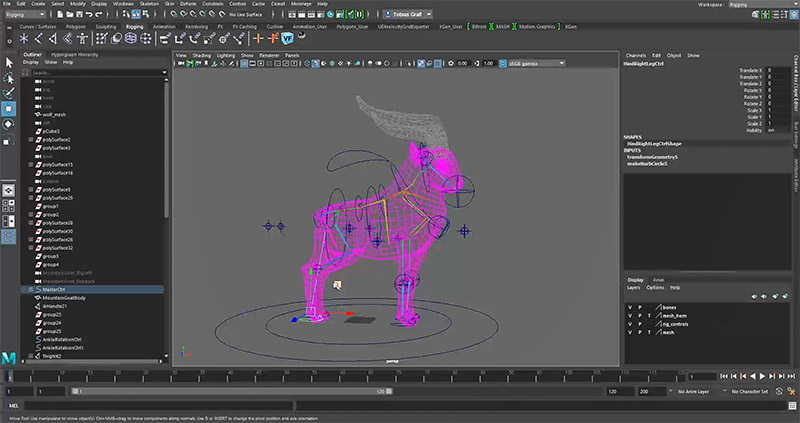 Other new features include animals fleeing from the wolf if the player approaches to fast and loudly, so called “flow fields” that help us with 3d navigation of all kinds of characters, improvements on the memory system that handles showing and hiding of different kinds of memories, and lots of other stuff that we can’t go into too much detail about with spoiling half the game 😉

Our Steam page is live! 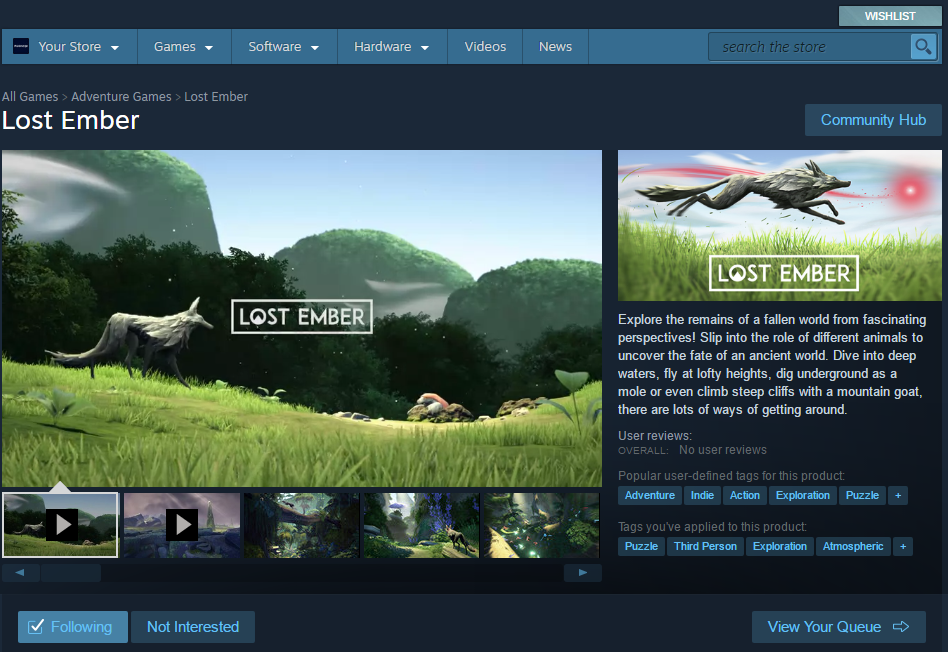 Go check out the page at http://store.steampowered.com/app/563840/ and make sure to follow and wishlist us! 🙂

Tina from allerleiunfug.de worked hard on the first wolf statues that some of you guys got with the Kickstarter rewards and this is the first one we got ourselves: 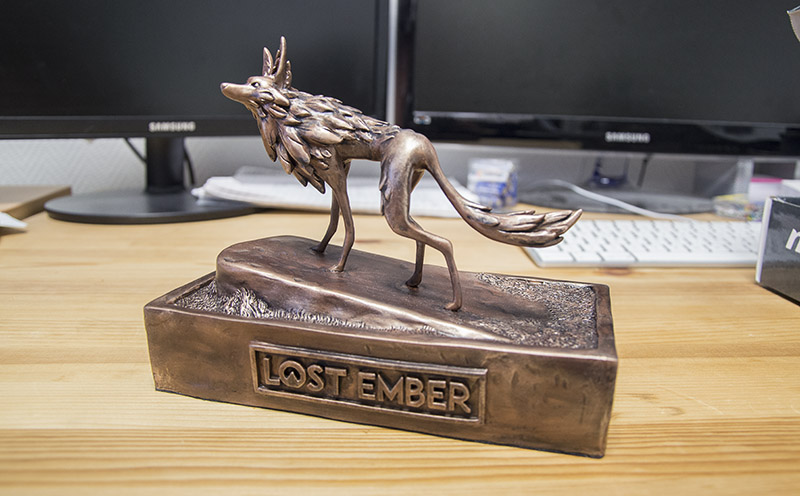 Amazing work, Tina, thanks a lot! 🙂 The production of the over 100 statues will take a while, but we already can’t wait to send you your special Lost Ember package and see your reactions!

Well, first of all we’ll finish blocking out our world. That should be done soon and that will be the first time we will be able to play the full game from beginning to end with every major feature included! We’re already pretty excited how that will turn out!
For those of you who got the alpha access: this will not yet be the alpha version we send out for testing. For that we want the world to start feeling as we want it to feel and have every animal and all or at least some of the optional content included. Trust me, it will be worth the wait 😉

Also, we’re still working on the trailer song. There were some hold-ups that delayed the whole thing, but we really hope it won’t be too long till we can send it to all you guys! I promise, we’re still on it and it won’t be that much longer!

And that’s it for this update! As mentioned in the video we’re trying our best to post the next update a little sooner than this. But there is still a lot of work to do and the more we get to the end of the game, the less we can show without spoilers. So we cannot yet tell when we’ll be able to show you guys more, but don’t worry: the next update will come and it will include some awesome new infos about Lost Ember 🙂